JUDAS PRIEST ROAR BACK WITH AN INSTANT EPIC, ‘NOSTRADAMUS’ ON MULTIPLE CLASSIC FORMATS & A WORLD TOUR 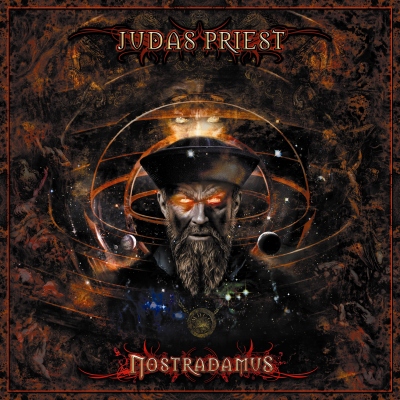 Think ‘Double vinyl, gatefold sleeve concept album,’ and some of rock’s all-time classic recordings come to mind. But in the realm of heavy metal, there has never been a double vinyl (now disc!) concept album that has managed to balance a thought-provoking storyline with metallic thunder. That was, until now. Metal legends JUDAS PRIEST will be releasing their sprawling double disc concept album, ‘Nostradamus’ via Columbia Records on Monday, June 16th in the UK/Europe, and a day later in the US on Epic Records.

Long in the works, ‘Nostradamus’ takes epic storytelling to a whole new level, as it recounts the life of this mysterious, world-known 16th Century French prophet. Some of the events that Nostradamus experts have interpreted as his predictions include the great fire of London in 1666, the rise of Adolf Hitler, and most recently, 9-11, among countless other renowned events.

“As in any concept piece, the lifeline needs to be of a solid source, taking the music over many levels of interest and perception,” points out singer Rob Halford. “Nostradamus’ contains new frontiers explored and defined. The sense of adventure and the journey we undertook bringing the man’s life alive with metal was a real labour of love.”

As with all new Priest releases, the group - singer Rob Halford, guitarists Glenn Tipton and K.K. Downing, bassist Ian Hill, and drummer Scott Travis - will embark on a mammoth worldwide tour in support of ‘Nostradamus.’ Priest will be performing at the 2008 Download Festival - on a bill also featuring Kiss - which will serve as a ‘homecoming’ of sorts for the group, as they performed at the first-ever ‘Monsters of Rock Festival’ at Donington Park in 1980.

Since 1974, Judas Priest has been one of heavy metal’s most successful bands, issuing such all-time classic albums as 1980’s ‘British Steel,’ 1982’s ‘Screaming for Vengeance,’ and 1990’s ‘Painkiller,’ and such arena-rocking anthems as “Breaking the Law,” “Living After Midnight,” and “You’ve Got Another Thing Comin’.” However, Priest’s influence goes far beyond their music - they were the first metal band to embrace the ‘leather biker look,’ a fashion that has since become synonymous with the musical genre. Additionally, Halford’s powerful four-and-a-half octave vocal range and the twin guitar harmonies of Downing and Tipton have been ‘studied’ by countless metal bands in Priest’s wake.

“The 'Nostradamus' album - above all others - is perhaps the one I'm most proud of,” says Tipton. “Whilst in essence and character still very much Judas Priest, it has afforded the opportunity to explore areas of classical and operatic dimensions that the band normally wouldn't. As a guitarist and writer it has inspired me to greater heights and opened new doors to intrigue and passion. From start to finish, it will take you through a magical experience filled with light, shade, drama, melody and emotion that reflects this unique man and his life.”

“For me, ‘Nostradamus’ has been a musical journey without comparison,” adds Downing. “The intrigue and mystery that surrounds this revered man has expanded my perception of heavy metal to the highest plateau and enabled me to reach the outer limits of my imagination and transport unique feelings and emotions to the instrument that allows me to express myself.”

In addition to the regular jewel case double CD version of the album, collectors will undoubtedly be interested in hunting down a copy of a Deluxe Double CD housed in a 48 page hardbound book package. But that’s not all - a Super Deluxe Box-set version will also be available with triple vinyl, the double CD, an expanded booklet & a poster.

Most bands of this high stature would be happy to play it safe. But not Judas Priest, who continue to take chances and break new ground. No other rock band could have pulled off such a grand statement, and Judas Priest have raised the bar once more with ‘Nostradamus.’

As to why they chose to make a concept album about Nostradamus, Tipton explains: “We didn't - he chose us. We feel it was meant to be!”

To get a taste of what awaits for you within ‘Nostradamus,’ go to livenation.com/judaspriest Monday, April 21st to download exclusive free mp3 of the album’s title track, as well as view the world premiere of the album cover art.

Sands of Time
PESTILENCE AND PLAGUE

Shadows In the Flame
VISIONS

Calm Before The Storm
NOSTRADAMUS

The release dates for the new Judas Priest album 'Nostradamus' are as follows: