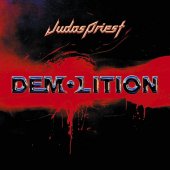 Britain’s riff machine is working at full steam again: four years after their comeback recording, Jugulator, internationally acclaimed metal legends Judas Priest are due to release their new studio album, Demolition, on July 16, 2001, proving once again that they still set the pace on the current music scene and serving as forerunners for other bands. Like all the albums that the band have come up with in the course of their history, Demolition is typically Judas Priest, and the group’s many fans don’t need to be told that this implies lots of exciting innovations, as well as any number of classic Priest elements. Considering how different and at the same time distinctive recordings like Point Of Entry, Screaming For Vengeance, Ram It Down, Painkiller or indeed Jugulator sounded, it goes without saying that Priest are anything but a band who are into marking time or merely copying themselves – after all Judas Priest’s material is marked by a permanent quest for new sonic landscapes and contemporary musical techniques. "We have been playing heavy metal for a very long time, and even on our early releases we never used the same sounds," guitarist K.K. Downing points out. "Just remember Turbo with its distinctive synthesised guitar sound. That was new at the time, not only for us but for the whole scene. We also like to keep experimenting with new equipment, which I consider an essential evolution. You have to try out new things as a musician. Our current album is once again full to the brim with surprising riffs, lead breaks, melodies, and it’s certain to impress people."

The same goes for vocalist Ripper Owens, whose amazing voice is closely linked to Priest’s successful comeback. Owens has not only proved himself as a worthy performer of classic Priest material but is also taking the band to new, uncharted territory on Demolition. He may be certain of the other band members’ respect, and even more so since the work on the new offering began. "Working with Ripper is really exciting," says Glenn Tipton enthusiastically. "He’s able to perform every single one of the old Priest songs, and at the same time he’s given a whole new dimension to the band, while always remaining typically Priest. You can hear his character, his strength, and the amazing range of his voice on the new album." K.K. Downing adds, underlining the comment: "This time around he has used his voice in totally different ways and has been able to show the whole range of his talent, which makes him sound even more original on Demolition than he did on Jugulator."

Tipton and Downing are referring to tracks like ‘Machine Man’, ‘Hell Is Home’, ‘Jekyll And Hyde’, or ‘Devil Digger’, which make Demolition a sparkling, powerful and at all times original album – not forgetting ‘In Between’, which kicks off with an oriental sounding intro, ‘One On One’ with its ultra-cool groove, or ‘Metal Messiah’, where the energy becomes almost physical. In close co-operation with their rhythm section consisting of Scott Travis (drums) and Ian Hill, Downing and Tipton have laid the instrumental basis on which their vocalist Ripper Owens plays out all his strong points. How wide his vocal range really is becomes apparent particularly on the ballad ‘Lost And Found’, which starts with an acoustic guitar and develops into an extremely catchy number with every note.

Demolition was produced and mixed by Glenn Tipton at Silvermere Sound and Riverside Studios in England. Tipton is responsible for all the arrangements and knows best what kind of sound and focus each individual song requires. "Throughout the production, I put great emphasis on bringing Ripper’s voice really to the fore," he says. "You can probably imagine what kind of responsibility it is to produce a Priest album. It’s always fairly easy to work with a young act – if they turn out to be a success the producer is considered the star, if they flop it’s the band’s fault. But when it comes to Priest everybody is watching. That’s why there’s always extreme pressure on us."

Mind you, the band are happy to face the challenge and live up to it every time – after all Tipton, Downing & Co. know best what their fans expect from them. "The basic inspiration for the songs remains typically Priest," explains Tipton. "And the lyrical concept of all our tracks is like the trademark of the band’s history." A history that is far away from being over, thanks to the arrival of Demolition!